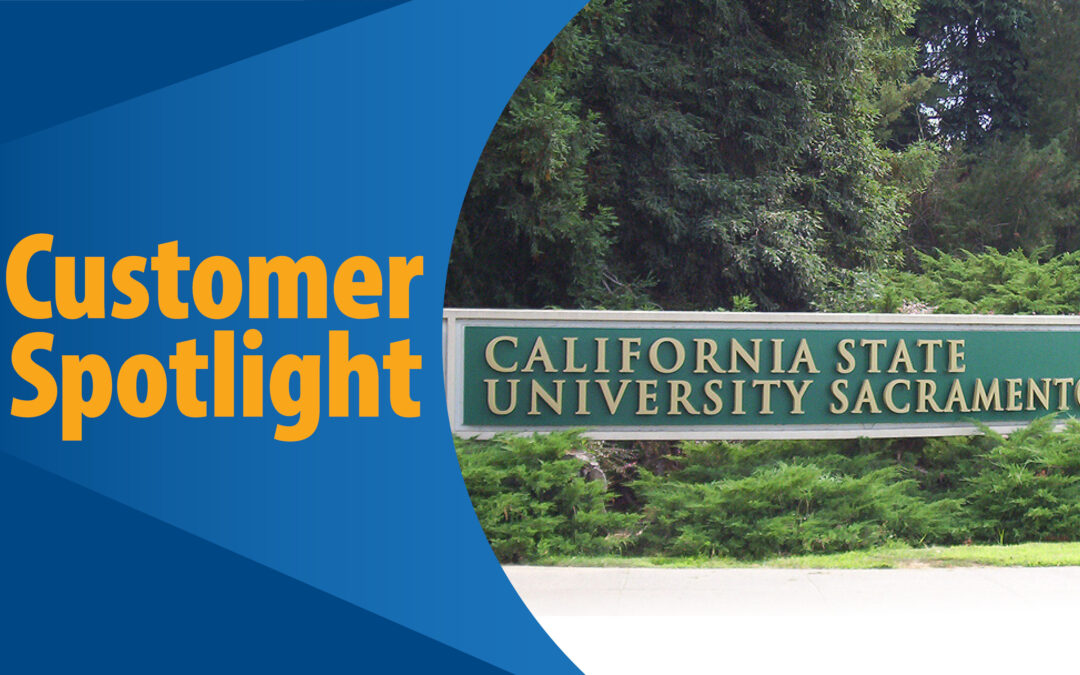 University Print and Mail (UPM), the in-plant at Sac State is managed by Laura Locket, who began her printing career in 1986 when she joined the UPM team as a secretary.  In her 36 years at UPM she has worked in all aspects of print and design; officially being promoted to her current role as director of UPM in 2017 after her predecessor Mike Kalstein retired.

We decided it would be good to check back in with Lockett for a post-pandemic update on how UPM is doing. We were anxious to reconnect with her to learn how Print Shop Pro® (PSP) held up throughout the pandemic and to discuss the state of UPM today.

Lockett’s expansive experience has provided her with a clear vision of future print demand at UPM and at Sac State. From shooting negatives on a graphic arts camera, waxing and pasting-up type created on a Varitype system, to digital design on PageMaker (the ancestral origins of Adobe InDesign), Lockett has witnessed the cataclysmic changes that print has undergone over the last 30 years. Even before the pandemic, Lockett has responded to changes in print demand at Sac State by inserting wide format (WF) and UVLED printing into UPM’s production arsenal.  As a result of Lockett’s ability and willingness to make adjustments as customer’s needs evolve, she has elevated UPM’s reputation as a best-in-class operation amongst peers. 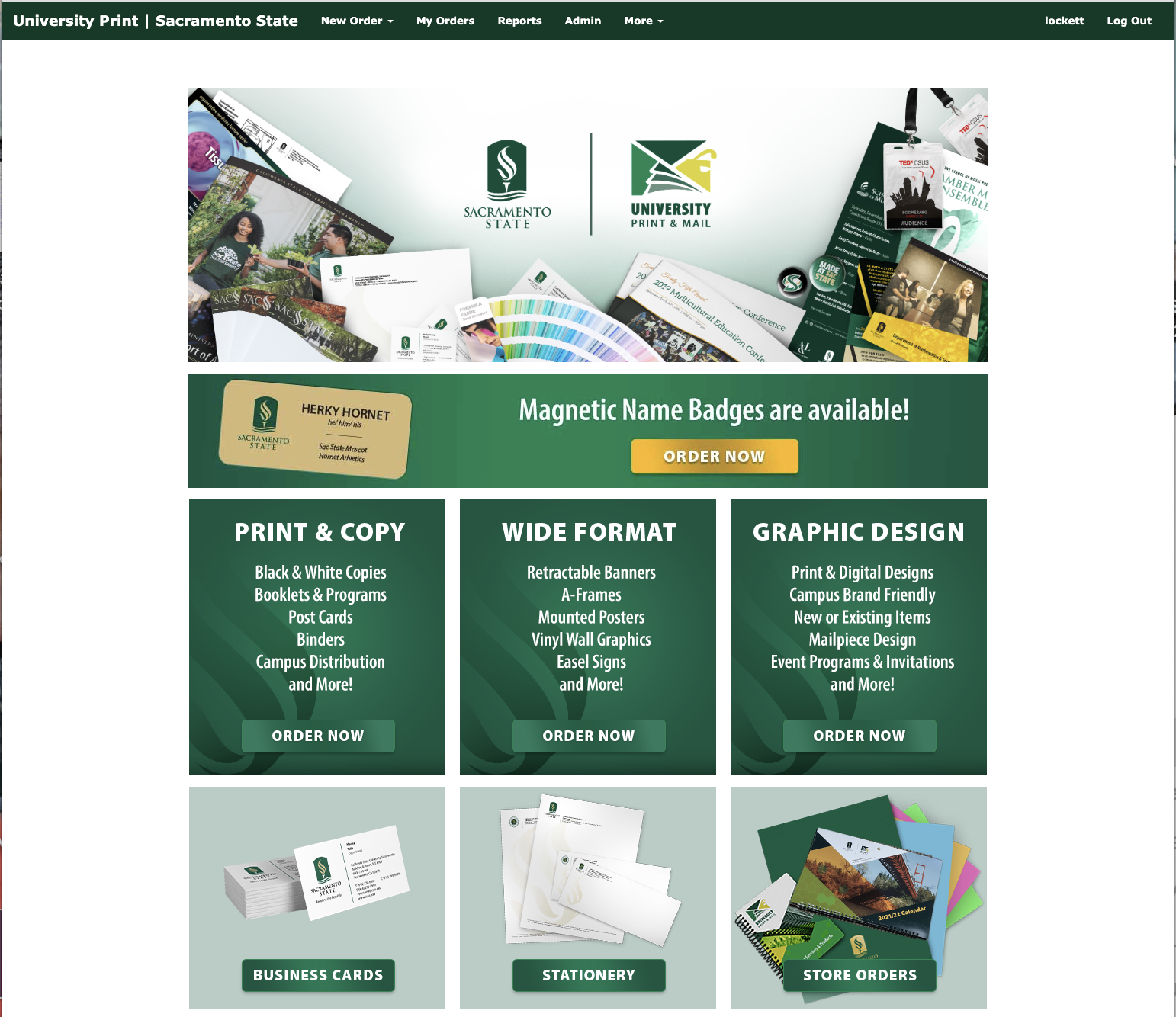 When we last chatted with Lockett in September 2019, she had just completed implementing PSP at Sac State.  (Also see In-plant Impressions (IPI) 2019 article for a highly recommended read to get the big picture of Lockett’s full story at UPM.)   In her words, having PSP in place prior to the pandemic was a “Godsend,” enabling UPM to respond to the needs of the University as it navigated the “new normal” of remote learning and social distancing.

UPM has five full-time positions in mailing, four full-time employees in its print shop, one full-time graphic designer and four part-time student assistants.  As with many in-plants, UPM suffered the effects of downsizing/resignations during the pandemic, losing two of its 12 full-time employees.  The process of replacing these positions and the ongoing struggles with supply chain issues are the greatest challenges that Lockett is currently facing.  In addition, Lockett says there is a physical lack of space in her current floorplan.

The current fall semester (August 2022) Sac State began with over 80% of classes being held in-person.  As a result, Lockett is now seeing a 40% increase in production over 2021. Lockett is optimistic about the future of the department, and it appears that UPM has not only weathered the pandemic but come through even stronger and more vital than ever.

In a bold and inventive move, Lockett utilized PSP’s Landing Page feature to create a unique online portal available only to students (See image below). Complete with a custom-designed online payment system and restrictive order categories, the student online submission portal has been a huge success since its rollout in 2021.  As a result, Lockett has captured a previously untapped, lucrative revenue source by providing popular print orders, such as portfolios, posters and WF produced products to over 31,000 Sac State students.  Revenue generated by student printing flows into an account that can be used for future equipment purchases. 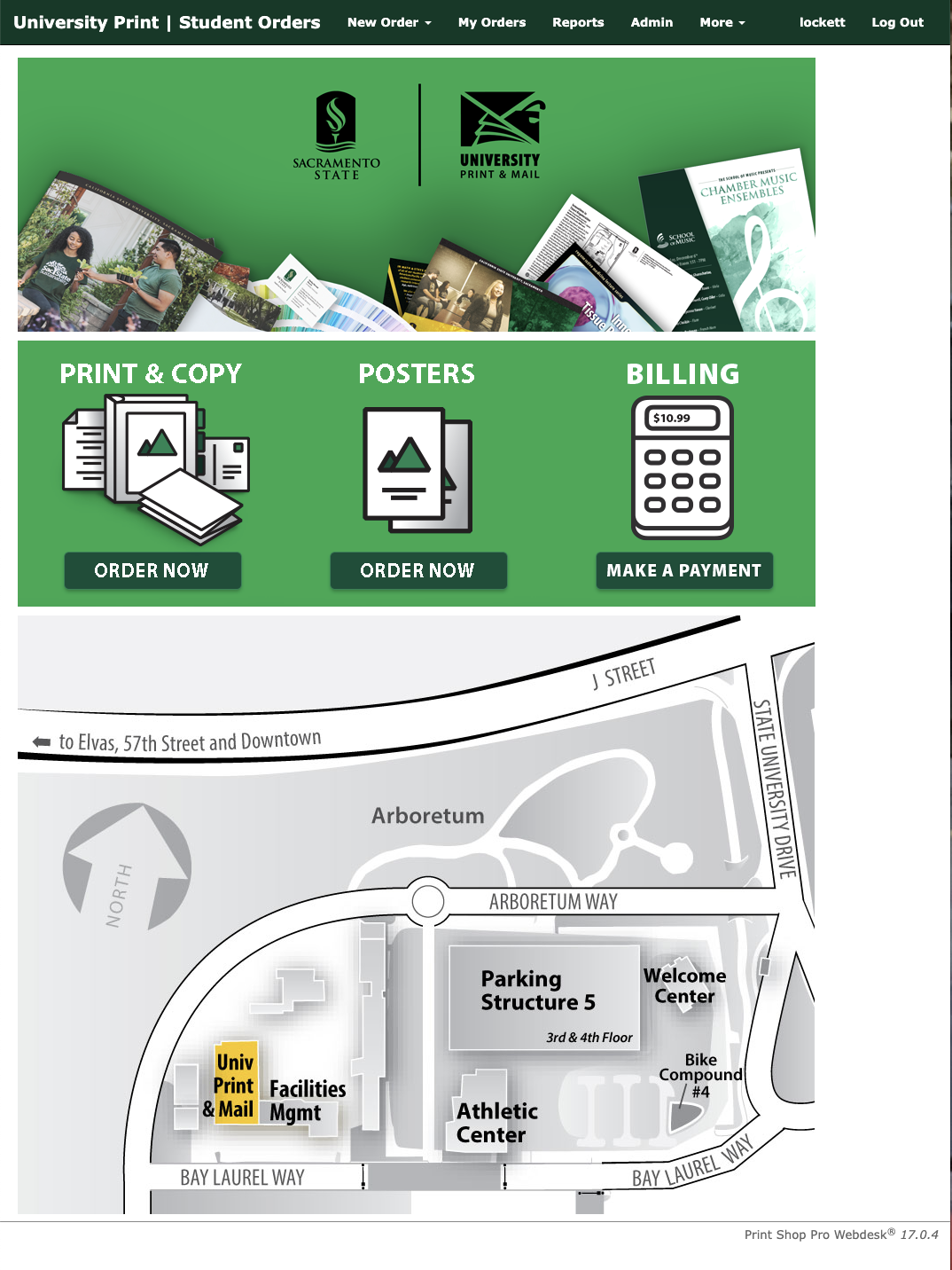 The effects of the pandemic were especially harsh on the partially funded UPM in-plant.  Event marketing makes up around 80% of submitted work from UPM customers and canceled events were not replaced with other modalities.

PSP’s Click Summary by Equipment reports reveal that from 2020 to 2021, UPM’s overall job intake dropped by 80%.  Overall impressions dropped by 73% with B/W toner impressions taking the heaviest drop of 85%.  As UPM was considered an essential service to the university, its primary focus was diverted to producing WF products such as floor graphics, banners  and posters.  As a result, WF had the lowest impression drop at just 21% from pre-pandemic levels.

Lockett “manages by data” heavily analyzing PSP Dashboard metrics with her team during UPM’s daily production meetings.  She especially likes the Active Orders Summary report which her team uses to gauge production capacity and to strategize regarding how print and graphic work is to be produced and completed before becoming overdue.  The PSP Dashboard is so helpful in planning UPM’s workload that university administration considered shifting videography and photography services to UPM’s purview so Lockett could manage them as well. 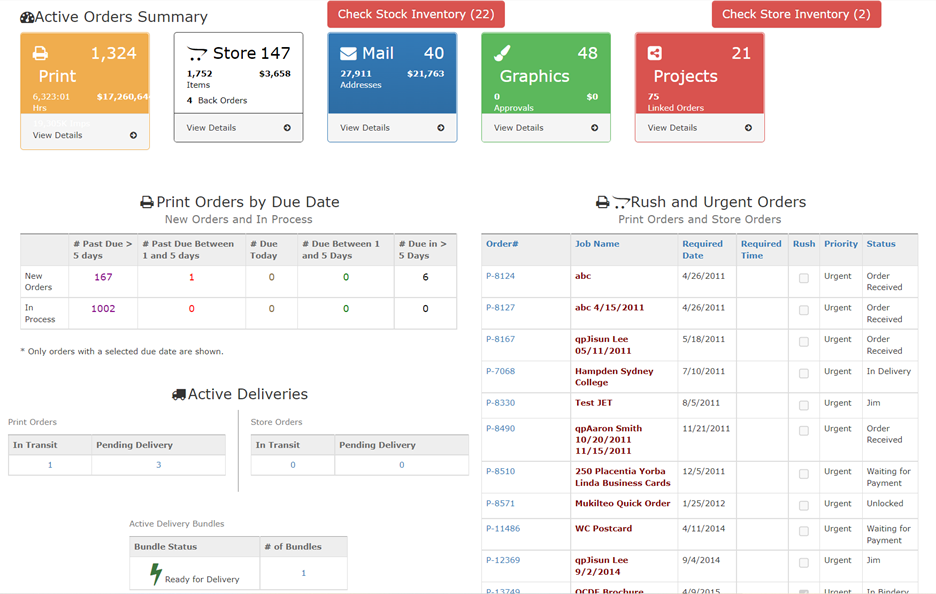 Lockett also finds ways to think outside the box in utilizing PSP.  When UPM’s paper folder required replacement, she needed to know whether a replacement would need to have perfing capability.  When she could not find a PSP report that could provide data on how much revenue perfing was bringing in, she asked PSP’s VP of Support, Chuck Bailey, to run a custom report that could provide her the data she needed to make her equipment purchase decision.  edu provided her a custom report which indicated that perfing only brought in around $500 a year, which was not enough to justify paying thousands of dollars for a perfing attachment on her replacement folder.  Data obtained via PSP ensures Lockett confidently makes sound decisions for UPM.

Lockett now plans to outsource the few perfing jobs that come into UPM as a way to maintain relationships with local commercial print shops.  This is another example of Lockett’s penchant for analyzing data to make smart business decisions that focus on providing vital services for Sac State that yield the most revenue and letting go of those jobs that don’t provide value back to the organization.

To fully execute plans she has for the in-plant, Lockett plans to expand her WF offerings to include flatbed and contour cutting.  Plans are also in the works to expand UPM production to include an auxiliary building adjacent to UPM to accommodate Lockett’s wish list of equipment.  Lockett anticipates that this added WF facility will be made available to UPM in the next few years once logistics are resolved.

Lockett is thankful for the support she has received over the years through organizations such as ACUP and IPMA.  She credits “networking with peers and using them as resources” as major factors in her management success at UPM.  Lockett sits on the ACUP board of directors, is on their conference planning committee, and is also a member of IPMA.  She names Mike Kalstein, her predecessor, and Nancy Fox, Sac State administrator, as mentors who provided her with knowledge and resources that helped her along her eventual path to becoming director at UPM.  Lockett’s recommendation for success is to “Surround yourself with talented people who know what their job is and let them do their job”  Lockett considers her UPM staff as being part of her extended family and happily notes that she is “blessed to have been able to work with amazing people,” throughout her career at Sac State.

Lockett enjoys the many benefits of PSP, so much so that she “doesn’t hesitate to sing its praises.” She has led several panel sessions and round table discussions at industry conferences like ACUP to inform peers on how PSP is positively impacting operations.We were glad to learn that PSP stood up to the challenge of a global pandemic and provided solid data that shows conclusively that things are trending in a positive direction for UPM.

A woman of faith, Lockett cites her “Aha!” moment as being at a particularly low point in her life and attending a Christian Women’s Retreat with her mother.  Despite being raised in a Christian home, it was at that retreat that Lockett had a cathartic experience with her Lord, realizing then “that whatever comes my way, I know God is in control.”  This realization transformed her life, giving her hope and the faith that gets her through dark times.

Lockett is an enthusiastic baker, unashamedly admitting “if it has sugar in it, I am there.” When pressed, Lockett humbly admits that her chocolate chip cookie bars are a staff favorite and her “go to” item to bake.  Lockett goes the extra mile in caring for her team.  She “cares about each one of them as a person,” and bakes up divine confections for UPM staff anniversary and birthday celebrations.  When asked about a word of advice for peer in-plant leaders Lockett says, “Just be kind; kindness matters.”

Married to husband Matthew since 2008, she is a mother of four (three girls and one boy), and grandmother of three (aged 2,5 and 7) so family life keeps her busy and happy.  Hosting weekly family dinners for up to 14 people at a time is an indicator of how important family time is to Lockett.  She shares that long-term retirement dreams may include a getaway in Hawaii but confesses she would not want to be away from her grandkids for too long.  For the time being Lockett is exactly where she wants to be, exploring and navigating new possibilities for her beloved UPM.