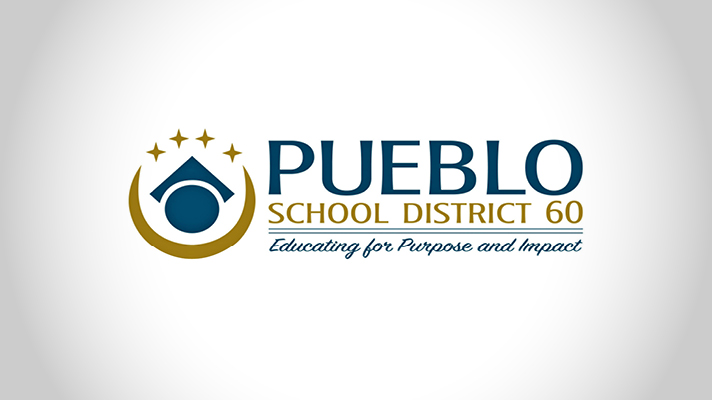 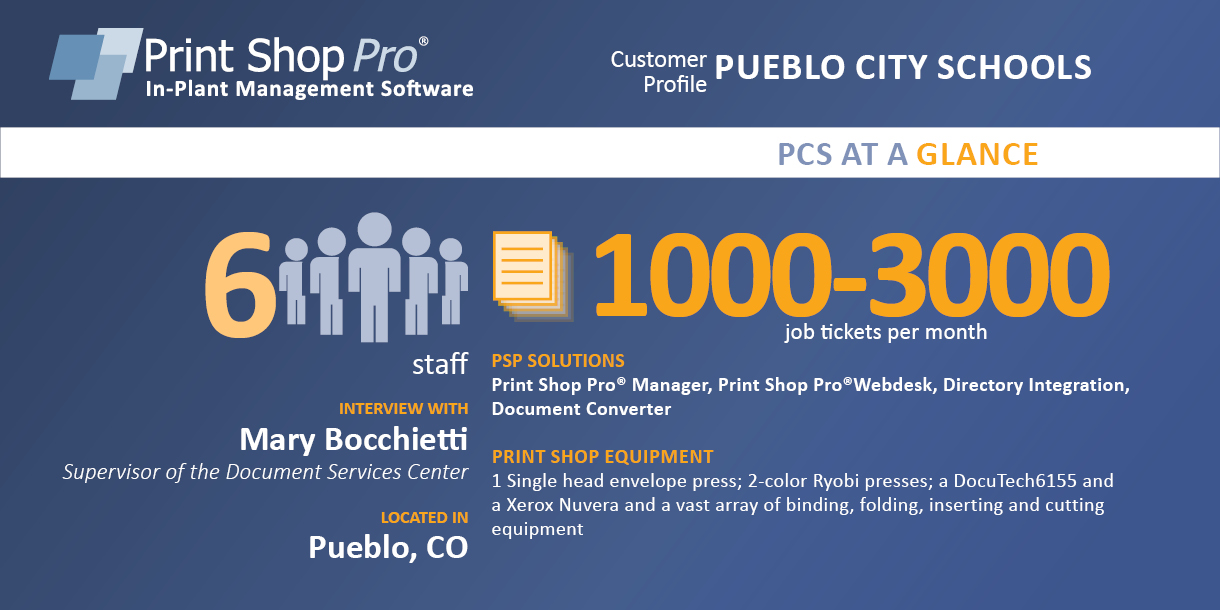 Mary Bocchietti, the Supervisor of the Document Services Center (DSC) began working with the district in 1998, when she came onboard as a student intern during her senior year. During her tenure, she has held every position in the District’s DSC except pressman, and she 7-plus years as backup to Graphic Design.

DSC provides services to 30 traditional schools, 3 charter schools and one online school. They also do all the printing for neighboring Pueblo County School District #70. In total, they have over 2,000 customers who submit all their print requests online.

The shop is fully equipped with a single head envelope press; a 2-color Ryobi press; a DocuTech 6155 and a Xerox Nuvera. Additionally, they have a vast array of binding, folding, inserting and cutting equipment.

The DSC’s staff of 5 full time and one part-time employee produces a variety of materials like diplomas, certificates, report cards, newsletters, sporting event programs, calendars and even cookbooks. Mary estimates that a full 75 percent of the DSC’s volume is made up of direct instructional materials such as student workbooks, writing journals, practice sheets and tests.

For the past several years, DSC has offered both yearbook and sports book programs. They offer six options: small, medium or large in either full-color or black & white. “We assist the customers in creating their own unique books at a low cost”, says Mary.

Prior to implementing PSP, they were using 3-part NCR forms. The entire process of computing costs, estimating and tracking of jobs was manual. They manually input the work order number, employee and the total cost of the job into a spreadsheet to send to Accounting to manage the charge back process. The entire billing process took 2 to 3 weeks to complete. Mary devoted almost the entire first week of each month completing the billing process for the previous month.

A desire to improve on the time consuming billing process and the struggles they had with providing timely responses to customers making inquiries about the status of their jobs, made them begin researching print management software solutions. Their Internet search led them to investigate edu Business Solutions’ Print Shop Pro (PSP), and a couple other systems.

Mary was part of a group who participated in an interactive web demonstration of PSP. Mary recalled the initial impression of both edu staff and PSP was very positive. “Their personality and enthusiasm was impressive”, said Mary. “We saw things in the program that made it clear to us that edu understood in-plant, school district business. We quickly identified edu as a company we would be comfortable working with.”

Even though they decided PSP was their system of choice, they had challenges that prevented them from moving forward right away. There were concerns about fitting the cost of the program into their stringent budget, and their internal IT group would not allow them to put anything on their servers. So they created an online form internally and attempted to use it for nearly 2 years. They implemented the form with a few departments, but never rolled it out to the district as a whole due to it being too problematic.

In 2007, the District went through an extensive revamping process, new people came on board and technology advanced to where they began supporting programs being put onto their servers. That change in direction, coupled with edu’s willingness to be flexible on the system configuration and pricing, led to the district purchasing PSP Manager, WebDesk, Doc Converter and LDAP in June 2008.

In July 2009, a water main broke and flooded the first floor of the Administration Building where the DSC is located. They lost pretty much everything and there were concerns amongst the staff that the district might decide to close down the in-plant operation in favor of outsourcing copy work to a FedEx Kinko’s and offset work going to local commercial printing organizations.

Over a period of several months the print staff oversaw the outsourcing efforts. However, the service just didn’t measure up to that of the in-plant operation. They struggled meeting customer demands, and were being billed at a higher price.

Mary and her team chose PSP because it had everything they needed in one, fully-integrated program that would provide more control and accountability for principals, teachers and print staff. And, PSP was the only system that supported their 22-digit budget codes and offered a dropdown list for customers to easily choose the appropriate budget code. They felt PSP WEBdesk would improve their turn around time and raise the level of service they provided. They also liked that PSP offered a solution for managing both offset press and copier business.

PSP’s built-in pre-approval process satisfied the district’s requirement that every print request be approved prior to being sent to the DSC, eliminate forged signature situations and having to chase down approvals and/or return print requests to the requesters. WEBdesk allowed customers to check job status independently online, a significant time savings. And finally, PSP’s exportable Charge Back Report eliminated the time-consuming, manual data entry to complete the billing each month. PSP was a perfect fit.

Both the data gathering process and remote training sessions went well. “Chuck is very knowledgeable and was responsive to our needs. He was excellent, and there for every question” recalled Mary. To prepare customers, email notices were sent and flyers distributed announcing the changes that were coming, and providing insight to the benefits that would ultimately be realized district-wide.

They conducted training sessions at the district training lab, and asked that a key person from each department or school attend. Training videos and hand out documents were created with step-by-step instructions for submitting a request online. The videos and documents were made available on their website for customers to view as refresher training when and where needed. DSC extended a 30-day grace period to accept hard copy requests. After that, any hard copy requests were returned to the schools with instruction that they were required to submit their requests online.

As of June 2010, they had 100% online submission. Mary’s favorite feature/functions include PSP’s Document Converter that presents the converted PDF files to the requester for proofing during the request process. She also likes that customers can the check job status online and the Integrated email/template feature for improved communications and customer service. They have created a workflow for an automatic email to be sent when a job is shipped or ready for pickup. “Our customers like it a lot!”

The ability to have billing and accounting all done within the system has reduced billing time from 2-3 weeks down about 4 days. And, she enjoys the improved customer confidence that DSC can meet their needs… even exceed their expectations.

Over the past couple fiscal years, the District has undergone huge budget cuts that resulted in the loss of 2 full-time employees and one of their Xerox DocuTech production machines. In the face of reduced resources, Mary gives credit to the implementation of PSP as playing a significant role in helping them be successful in operating their business as usual. Mary is happy to continue to recommend PDP and edu as a vendor.